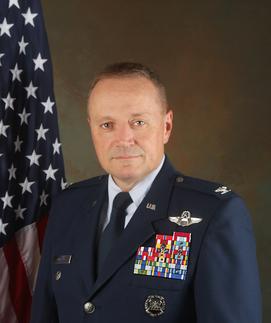 Colonel Dobson entered the Air Force after graduating from the University of Kentucky in 1986, earning a Bachelor of Science degree in Mathematics.  His educational experiences include a Master of Science, Administrative Science from the University of Montana; a Master of Science, Military Operational Art and Science from the Air Command and Staff College, Air University, Maxwell AFB, Alabama; and a Master of Strategic Studies, Army War College, Carlisle Barracks, Pennsylvania.
Colonel Dobson began his active service as a student in Undergraduate Pilot Training at Reese AFB in Lubbock, Texas.  After graduating and earning his pilot wings in June 1988, he served as an Instructor and  Evaluator Pilot in the T-37B for the 33rd and 35th Flying Training Squadrons, and the 64th Operations Group.  In 1992, he volunteered for transition to rotary-wing aircraft, earning his helicopter rating at Fort Rucker, Alabama.  From there he moved to Malmstrom AFB in Great Falls, Montana where he flew the UH-1N Huey with the 40th Rescue Flight supporting ICBM operations and flying search and rescue missions.  He is credited with seven saves and five assists during rescue operations.
In 1995, Colonel Dobson transitioned to the MH-53J Pave Low helicopter, completing the MH-53J Flying Training Course with the 551st Special Operations Squadron, Kirtland AFB in Albuquerque, New Mexico.  Following graduation, he was assigned to the 31st Special Operations Squadron, Osan AB, Korea, where he served as the Chief of Safety and an MH-53J Aircraft Commander.  He traveled extensively throughout Asia, working with partner nations’ special operations forces.  In 1997, he was re-assigned to the 20th Special Operations Squadron, Hurlburt Field, Florida where he was an Assistant Operations Officer and MH-53M Evaluator.  During this period he deployed several times to Operation Southern Watch in Kuwait and to Italy as the Operations Officer for USAF helicopter operations for the war in Kosovo.
In July 2000, Colonel Dobson was selected to attend the Air Command and Staff College at Maxwell AFB in Montgomery, Alabama.  After graduation he moved to Kalkar, Germany, as the Offensive Plans Combat Search and Rescue Officer at the NATO Combined Air Operations Center 2 in Kalkar, Germany.  While in Kalkar, he traveled extensively across Europe teaching Combat Search and Rescue command and control procedures, and he led a NATO team to Agoya, Russia, to complete the Russian Combat Survival Course, the first NATO-Russia cooperation event of its kind.  In 2004, he was returned to flying at Moody AFB in Valdosta, Georgia, flying the T-6 Texan II trainer with the 3rd Flying Training Squadron.  He served as the Operations Officer and later as the Commander of the unit, ensuring the next generation of Air Force pilots was prepared for their follow-on training.
In 2007 Colonel Dobson moved to Carlisle Barracks, Pennsylvania, where he attended the US Army War College.  Upon graduation, he stayed at Carlisle working with the Army as the Chief of Air Force Integration at the Peacekeeping and Stability Operations Institute.  While there, he worked with the Department of State and the United States Combatant Commands, advising on peacekeeping, stability, and reconstruction activities to ensure viable transitions from military operations in regions around the world.
In December 2008, Colonel Dobson deployed to Baghdad, Iraq, as the Vice Commander of the 321st Air Expeditionary Wing and Chief of Staff for the Coalition Air Force Transition Team.  He was responsible for overseeing training and advising teams all over Iraq working to rebuild the Iraqi Air Force.  After returning from Iraq, he was assigned to Maxwell AFB in Montgomery, Alabama, serving as the Dean of Academic Affairs and Squadron Officer College and culminating his career as the Vice Commandant of the Air Command and Staff College.
Colonel Dobson retired from active service on 30 June 2014.   He is a Command Pilot with more than 4,000 flight hours in the MH-53J/M, TH-53A, UH-1N, UH-1H, T-37B, T-38A/C.  His awards and decorations include the Legion of Merit, Bronze Star Medal, Defense Meritorious Service Medal, Air Force Meritorious Service Medal, Aerial Achievement Medal, Air Force Commendation Medal, Air Force Achievement Medal, National Defense Service Medal, Armed Forces Expeditionary Medal, Kosovo Campaign Medal, Iraq Campaign Medal, Global War on Terrorism Service Medal, Korean Defense Service Medal, Armed Forces Service Medal, and NATO Medal.
He is married to the former Leisa Murphy from Versailles, Kentucky; they have one daughter, Kaelyn. ​